With the club deciding not to renew their contracts, Evertonians say farewell to a trio of long-serving players. Here we take a look at their finest moments in a blue shirt.

Arguably the best signing of David Moyes’ tenure, ‘Schillo’ brought some much needed flair to a pragmatic Everton side in 2007. He forged a telepathic relationship with Leighton Baines down the left side and it was no coincidence that when the duo played well, Everton played well.

His skilful performances brought the attentions of Tottenham Hotspur, for whom the South African departed in January 2011. But a year of injuries and being overlooked by Harry Redknapp saw the midfielder return to Goodison park on loan just 12 months later, re-signing permanently in the summer of 2012.

If ever there was a goal deserving of winning any game, it was this one. Unfortunately, Everton kept up their record under Moyes of never having won away at any of the Premier League top 4. They conceded with just minutes to play to a deflected Tomas Rosciky effort, but the heavy run through a snow-laden Emirates and the deft chip to put Everton 2-1 up in the 80th minute will live long in the memory.

With the Blues struggling for form by New Year in the 2011/12 season, Evertonians were ready to forgive and forget.

Signed in the nick of time before the end of the January deadline, Piennar made his second Goodison debut against Chelsea 11 days later and announced his return with an excellent finish to set the Blues on their way to a 2-0 win.

A fantastic strike from Osman which was voted Everton’s goal of the season in 2008, but it was a great example of the changing style of Moyes’ Everton side, competing in Europe and playing some classy football at times with the likes of Pienaar and Mikel Arteta.

Tim Cahill’s ball sets Baines free down the left before his infield pass is ingeniously flicked into Osman’s path by Pienaar’s right instep. Not only did Pienaar have the spatial awareness and footballing brain to know his team mate was better positioned, but the technique to pull it off was equally impressive.

Revel in the video footage below.

There are few one-club men about in 2016 but Osman is one of two released by Everton this summer (ignoring two loan spells at Carlisle United and Derby County respectively). Some would argue the low-key end to Osman’s 16 year Everton career is a harsh way to treat such a loyal servant, but in footballing terms the decision to release a 35 year-old who made just nine league appearances last season is probably the right one.

Often the scapegoat for fans while playing out of position in left midfield and suffering for consistency, Osman bore the brunt of the Gwladys Street’s frustrations for a number of seasons. But with the signings of Arteta and Pienaar the trio formed a midfield which shifted the emphasis from dogged workmanship to skill and guile.

With tidy feet and a low centre of gravity, the Kirkby born Blue chipped in with his fair share of goals too, some of them crackers.

A beauty of a strike in a routine 3-1 win against the Greeks. It owed much to the breathtaking build up but the strike epitomised Osman’s ability and footballing brain, connecting with the outside of his right boot and cutting slightly across the ball.

Everton enjoyed a fruitful few seasons against the nouveau-riche of Man City and Osman had a habit of netting in these fixtures. As well as the bravest header you’ll ever see in 2011, Ossie got the better of Joe Hart again in 2013 with a swerving shot with his weak foot; a goal I remember not really getting the credit it deserved at the time and one that still seems to be overlooked.

Six years before he made his first team bow there were signs that Ossie might have enough to make the step up to Premier League football. One of those signs came in the form of an instinctively taken volley at Ewood Park.

It’s testament to his belief and determination to make it at the top level, that of all the promising youngsters on show in that cup winning side, Osman was one of three of the more unlikely players who would go on to enjoy prolonged careers in the Premier League (the others being Richard Dunne and Tony Hibbert). Phil Jevons, Francis Jeffers and Danny Cadamateri were all tipped for stardom but saw their careers take them away from Goodison Park and down through the divisions.

Meanwhile on 3rd August 2014 Osman walked out for his testimonial match, 19 years, 433 appearances, 57 goals and one trophy later (the Roars Against Racism Cup, 2010, of course). A hugely underrated footballer and a true blue.

Unlikely to be remembered for his footballing talents, nonetheless Hibbert is a player who deserves credit for making the very most of the talents available to him.

A consistent and dependable right-back, the lad from Huyton was never one to shirk a tackle and was well acquainted with the official’s book, receiving three red cards and 49 yellows.

But his loyalty and love for his boyhood club are the traits that will forever endear him to Evertonians, in an otherwise uninspired career.

And riot we did. Hibbert has earned cult hero status at Goodison Park, largely due to his attacking deficiencies. While the defender has never come close to as much as a shot on target in his 16 year career, Blues have long repeated the “Hibbo scores, we riot” phrase with more than a hint of jest.

But in 2013 that’s exactly what happened, Baines teeing him up from a free-kick in his testimonial match which just about squirmed under the Hans Segers-like attempt from the AEK Athens keeper.

Fishing for a new career angle

And how could we ignore the Huyton-born defender’s penchant for fishing. For someone who spent the odd occasion fishing the ball out of his own net, it’s admirable that Hibbert took to the nets in his spare time.

And while he’s not been one to make back page headlines, he at least made it onto the front page of Britain’s No1 weekly fishing newspaper! A career highlight I’m sure. 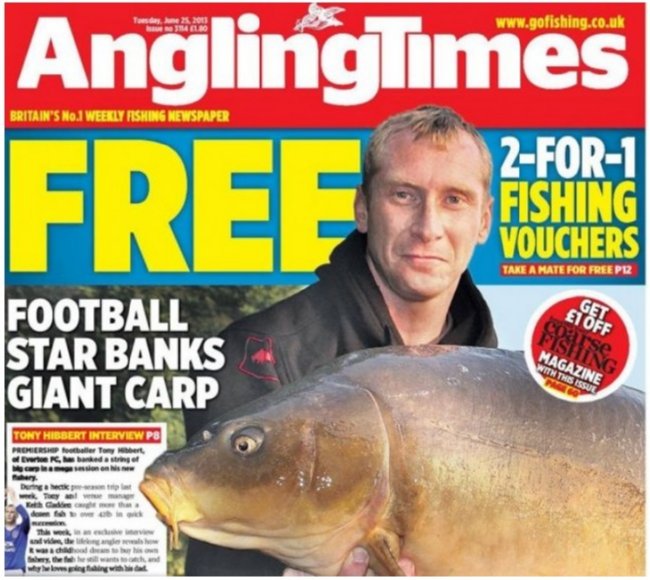